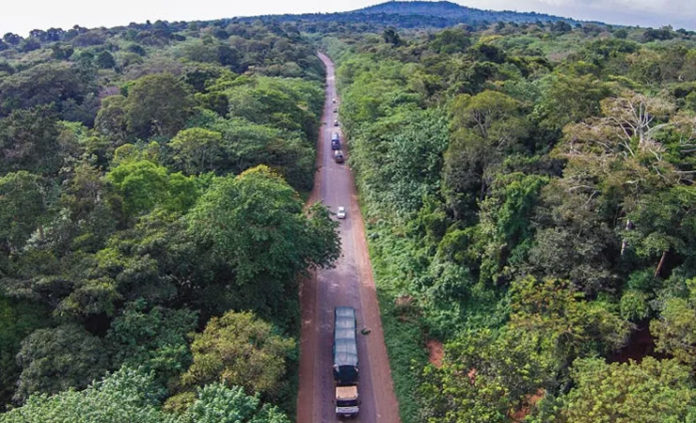 We’ve heard Sevo telling whoever is in charge of cutting things to cut down part of Mabira Forest. Then we’ve heard the opposition telling Sevo “You’re joking, boss! Not when we’re alive!”

Then we’ve heard Sevo barking back that kuja nini inaweza, Mabira is going to be cut down because as long as he is President and you’re not Amelia Kyambadde, you will listen to what he says.

This whole time the trees have been following events quietly. Until now.

On Friday we packed a few crates of mineral water (we didn’t want to hurt their feelings with sugarful drinks) and went there with Deejay Beekay to throw a farewell party and maybe talk to them for the last time. We interviewed Fred, the tree in charge of human relations.

How do I look?

ULK: Fred, I don’t want to sugarcoat things so I won’t even start by greeting you. Let’s cut straight to the chase.

ULK: I know. You have electricity, right? Since you’re just here next to the dam.

ULK: So I assume you know that you are dominating the news in Kampala?

Fred: Most of us watch movies all day but yes, we know.

ULK: So why aren’t you guys doing anything? I know trees can fight. I’ve seen Harry Potter.

Fred: No, that was just in the movie. We…

Fred: Yes, I know. Let’s talk about the issue at hand. I think this government is…

ULK: Are you going to fight or not? Can’t you at least walk to work?

Fred: But this is our workplace.

ULK: Then walk away from work.

ULK: Besigye is not a tree. He’s an opposition. And the only government tree that could have helped you was uprooted and replaced by a speaker. A speaker! It’s not even a Sony. It’s a Ssekandi.

Fred: So what do you advise?

ULK: Stop creating rain, stop giving us food, stop helping with our ozone layer and let the sun burn us, remove the environment from your Facebook friends and stop giving us oxygen.

Fred: You realize you will all die.

ULK: As long as you give us a few trees to go with at ULK offices and then you kill the rest of the country. How can they cut you down for sugarcanes like they can’t grow anywhere else? What has the Sugarcane government said about this?

Fred: Nothing! The human government even gave them kettles and milk so whenever we go there for peace talks they just offer our representatives tea with so much sugar and tell them to chill out.

ULK: Which sugarcanes did you talk to?

Fred: The ones in Lugazi.

ULK: Have you tried the Kakira ones?

Fred: No. Most of our representatives refused to go there because they thought those ones had jiggers.

ULK: Eh! So what are you going to do now?

Fred: We are all changing to NRM. There’s nothing else to do.

Fred: We’re sorry, Uncle Besi. Don’t take this personally. It’s just our survival instinct taking over. We’ll come back and support our real parties when this is over.

Safe Word Ideas: Safe Words to Use During Sex