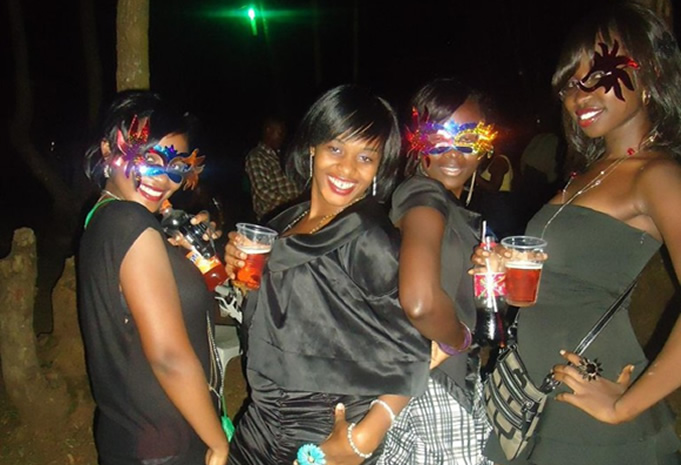 But those Nkozi people are really fake. I’d say *stupid if I didn’t intend to go back this Saturday. There’s absolutely no excuse for partying with people that one has declared stupid because, excuse me, You become exactly as dimwitted as you think they are when you pack your overnight bag the second time in as many weeks and run back to party with them.  I’m not itching to be put on the spot by my ego, so we’ll stick with fake.

For months on end, they got on roof tops and screamed, wailed, beat gongs, even yoddled about “The biggest masquerade party ever to go down ever ever” and then the day came and they couldn’t even be bothered to dress right. What were they trying to do? Make all people from Kampala seem like absolutely square and embarrassingly over eager children? I mean, we get that you’re too cool for the constraints of fashion, too awesome to stick with the theme, but a line has to be drawn someplace. Doesn’t it?

You. You reading this. Doesn’t the word masquerade put you in mind of an alluring little nymph straddling the bar between sexy and utterly ridiculous? Or is it just me and my misguided imagination?  I saw only about six girls who bothered to acquire fancy getups for the party. Four of them are here:

One of them even wore what looked like a flower girl’s dress.

And the other one was me. Thus the tirade.

However, whatever bitterness that was born of their lack of masquerade dress-sense (jeans? Jeans? Outrage!)  was quickly and efficiently mellowed by the delightfully cheap liquor and Dj Kim’s bombastic ability to rip perfectly ordinary music from his ka computer and hurl it at the dancefloor. Dance-grass. Dance area. That music had rippling muscles. Or maybe the booze had muscles. Or maybe that is just how Masaka does, mehn.

Because this is supposed to be some sort of account of the things that went down at that party and not a rant as a direct result of the author’s five minutes of grave embarrassment on finding that her brave choice of haute couture had been wasted, here goes: