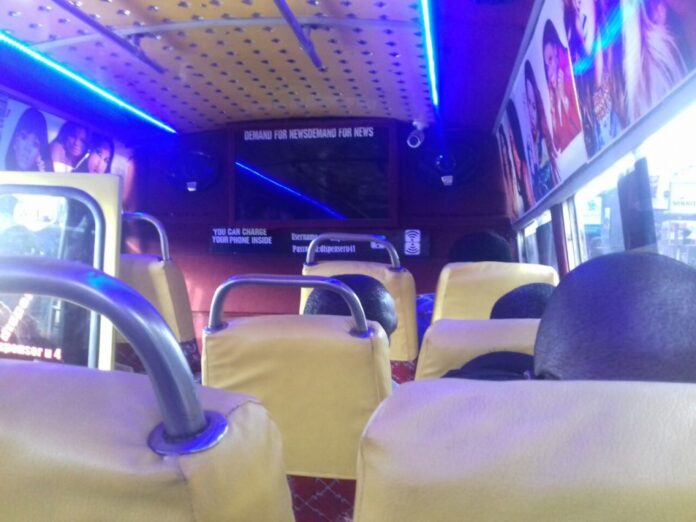 Were this commuter minibus a tenement in Kamwokya in Kampala or Dandora in Nairobi, burglars would be swooning over it.

The burglars would be thinking of when to strip it of some of its electronic parts.

Probably the first they would think of grabbing the 32-inch flat television set hoisted on the board between the driver’s cabin and the passenger section.

A TV set of the brand in the minibus could fetch Shs1 million. Shs1 million could pay a lower ranking policeman salary for four months. The second to go would be the 1, 000-watt speakers.

Since many thugs are young men, with an ear for bass, the burglars would probably not sell the speakers.

They would keep them for their home entertainment.

To conclude the burglary, if the miscreants are cheeky, and have Smartphones, they would take pictures of themselves ensconced in the seats and then use the WiFi in the minibus to update their status on their social networking sites like Facebook.

And, to provoke art critics, they could take selfies, ensuring the Christiano Ronaldo, Barack Obama or Lil Wayne graffiti or the abstract scribbling on the sides of the minibuses are in the frame, and post these.

WiFi, flat screens, CCTV are for customers entertainment and security. But the cost of these could buy a used sedan

The bad news for the burglars is that this commuter minibus, also known as a matatu, is not a tenement.

It is one of the many fabrications on Kenya’s capital, Nairobi, streets.

To attract travellers, the savings and credit cooperatives (Saccos) and the individuals who own them spend a lot of money to ‘soup’ or ‘pimp’ them up.

They do this to attract the young commuters who would not mind a discotheque-like surround sound.

During the traffic snarl-ups, the music oozing through the speakers serve the same purpose the sports channels in commercial banks lobbies serve – take the customers minds off the long wait.For security reasons, some of the owners install closed circuit television (CCTV) cameras in the minibuses.

The presumption is that the thugs who would board the minibuses – as law-abiding citizens only to draw revolvers from their trench coats and rob the genuine passengers at gunpoint – would be deterred by the CCTV. Of course, CCTV has never stopped criminals from wearing balaclavas just before ‘missions’.

If the ‘pimping’ that goes into a matatu serves none of the above purposes, at least it helps to take one’s mind off the fact that the matatus front reminds some of a bulldog’s face

Guvnor Club opens with a bang