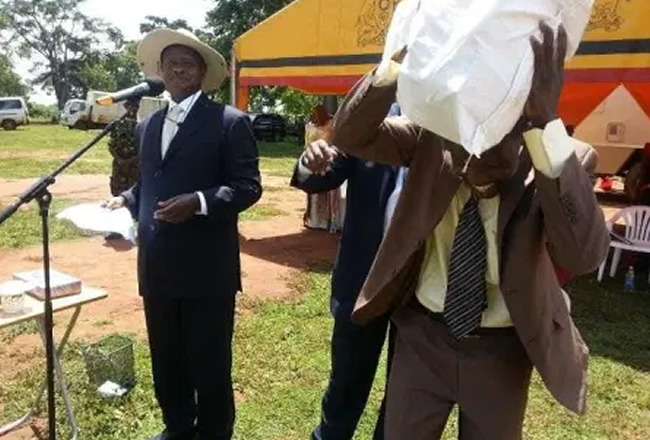 The internets define the mafia as an organized international body of criminals, operating originally in Sicily and now especially in Italy and the US. I’ve therefore come to the conclusion that these internets are made in China.

The original ones that we use here at ULK headquarters define the mafia simply as Ugandans. Why? Because everything we do is designed to groom us into professional thieves. Let me introduce you to the top five Ugandan mafia groups:

According to the police, when someone is jailed for stealing from you, you’re responsible for feeding them daily until their time in jail is served. If I ever steal from you, I like spaghetti and fresh passion fruit juice.

According to the constitution, when you’re caught stealing the private parts of another man’s wife, you’re given a hefty fine of only two hundred Uganda shillings.

My wallet right now says I’m entitled to about 2000 married women, give or take.

When money is stolen from the public, government says it’s the same public supposed to pay it back. That there’s no reason to call it ‘public funds’ if it’s going to be paid back by someone other than the public.

Nti mbu that it’s like asking a thief to give you your phone back after they’ve stolen it. It’s disrespectful to the thief.

This group has perfected the art of stealing people’s updates and passing them off as their own just to look as intelligent and informed. They sneak into your profile at night while you’re sleeping, take every update they can lay their hands on and run out before you hear them and call the police.

Then when you ask them about it in the morning, they say they also just bought them from some vendor in Kamwokya.

These are the most cunning cos they play with people’s feelings. When taking you to your destination, they never shut up about everything so as to make you feel like they are now family and guilt trip you into letting them keep your balance. Whatever you do, don’t let them win.