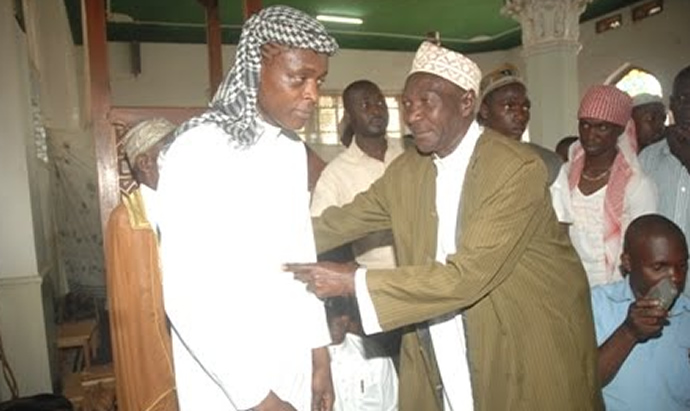 I’m listening to a David Guetta track but the female security guard at ULK keeps looking at me with molestful eyes like I dare you to look or say anything suspicious so that I put my filthy hands allover your legendary body.

She’s making it hard for me to scream “It’s the bomb!”

Anyway, that’s not what brought me here. I come with good news and bad news. Actually, I don’t. The line is just always fun to say. It makes me want to become a Good News And Bad News Option Deliverer when I grow up.

Chameleone had foreplay with another religion, and then refused to have sex with it. That’s just mean.

But you guys, the dude is called Chameleone. Don’t say he didn’t warn you.

Nsaba Buturo said Ugandans hate themselves. Me? I hate myself? I should tell my mum about this.

For quite some time now I have been debating on whether to diss this guy. But after reading the Monitor article he wrote, I saw a little bit of sense in it. Like 1% sense, which is quite a significant record coz he has never gone that high. Pun totally unintended.

So after much deliberation I decided to just diss him for his sake. Spare the diss, spoil the Buturo, right?

It’s like as the rest of the world fights to keep up with current times, the dude is just stuck in those days where people still used Windows 90 to think. Though I believe this one is still stuck as far back as Ventilators XP.

Rebels found an entire album of Condoleeza Rice’s photos in Gaddafi’s stash. Where are you, Gaddafi? Raise your hand. Gaddafi? Your hand.

But what the hell is this dude’s name? When you ask Google, he will tell you:

Yo. Brother, did you mean:

Museveni insists he will give out Mabira Forest. The only thing that can talk to this guy and he actually listens is his mouth.

Sevo: Mehta my love, take this great gift from your humble serv…

Mehta: No, it’s okay. Someone told me that sugar can grow somewhere else.

Sevo: But I want to give it to you.

Sevo: Take it, you goddamn piece of pupu that is not yellow! You can sell it back to me after but take it! No one tells me what to do!

Sevo: Good. Now if you don’t want it, give me other alternatives. You want another forest?

Sevo: You want another forest?

Makerere University lecturers were fired for wanting a salary increase and the students sent packing for wanting to study.

It’s like entering a restaurant, the waiter asks you for what you want, you tell him you want food and he goes, “I’m sorry but I’m going to have to ask you to leave, sir!”

Apparently, it’s unethical to teach or learn at MUK. I can hear the Steakout manager going, “Thank you! That’s what I’ve been trying to tell them all along. A focused university student will not allow books to get in the way of his future. Come to my bar, get high, then go out and be whoever you want to be or fight whoever you want to fight, whichever comes first.”

Kampala Mayor Erias 49 Cent Lukwago has told the government not to pay him 33million shilings nti it’s too much. I swear the day I…sigh.

Elyas, I respect and admire your noble deed. But just because that’s what my dear beloved readers expect of me. If they weren’t looking, I’d call you a nincompoop (With emphasis on the last four letters) and spread rumours that you just wanted Jennifer to say “Eeh maamaaaaa!” so that you get laid. Then I’d sneak into your office at night and put a hot nail in the middle of your chair.

But since my dear beloved readers are watching me closely, way to go, brave soldier. You’re the kind of people this city needs. Yay!

Things Every Superhero Should Have