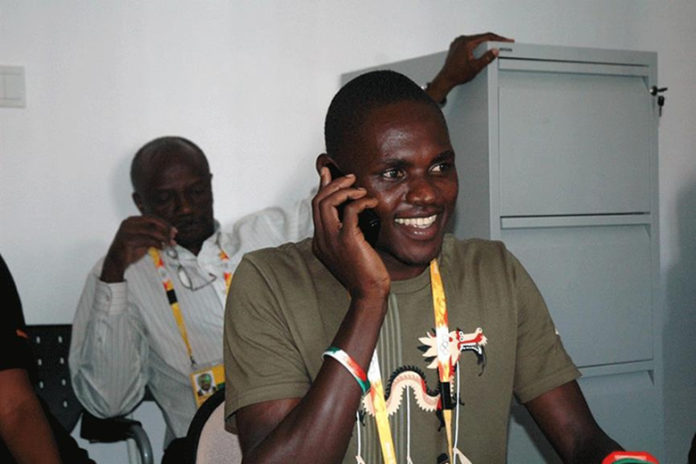 Moses Kipsiro. You know him? The Ugandan who beat three Kenyans and some other insignificant dudes at running in circles up to a certain string? In Uganda, it’s in our blood to keep running from the police. I don’t know how they expected to beat Moses (Yeah, I call him by his first name. I be close to him like that).

So our President, Mr. Museveni was watching La Tormenta one night when someone called from the kitchen: “President of Uganda, first change back to the other station. Kipsiro has won something.” Irritated that someone was getting his attention off his favourite programme, he shouted back, “Is he in NRM?” After getting a “Yes”, he gladly switched to the Commonwealth Games in India.

And that’s how he got to know about the boy’s first victory. Other media organizations just told you that Museveni called Kipsiro but ULK ran ahead. We tapped their call. You remember the person calling from the kitchen? Yes, that was a ULK reporter disguised as a human being and this is what he/she/it came back with:

Kip: Oh! President Museveni! Wow, it’s a privilege to hear from you, sir.

M7: Me also, me also. I was asking, do you have a computer near you?

Kip: No sir. But there’s an internet café I can run to a few miles from here. Okay, I’m in the café.

M7: Good. Accept my friend request on Facebook. It’s an honour to know a celeb.

Kip: No sir, the honour is mine. I’m very privileged to talk to you, sir.

M7: Are you arguing?

Kip: No sir. You own the honour.

M7: Have you accepted my request?

M7: Does it benefit Movement in any way?

Kip: No sir. Not really.

Kip: But it benefits Uganda. It gives the country positive publicity.

M7: Okay. Anyway, I’ll have to appear in public with you, shake hands, give a speech…you know how these things be.

Kip: I understand, sir. How about the others?

Kip: There are other Ugandan sportsmen who were sent here with me.

Kip: To compete in the Commonwealth Games. Just like me.

M7: Are they all Kipsiros?

M7: For now, I’m dealing with Kipsiros only. So when you arrive, I’ll give you some pocket money and make a promise to maybe construct something big in your honour, which I won’t keep, of course. Time will pass and people will forget.

M7: Personally, I would have loved to keep the promises but…blame it on the government; them and their big stomachs.

M7: Okay. I’m running out of airtime but we’ll…

M7: No… [This call will de disconnected shortly!] …I meant the credit on my ph…