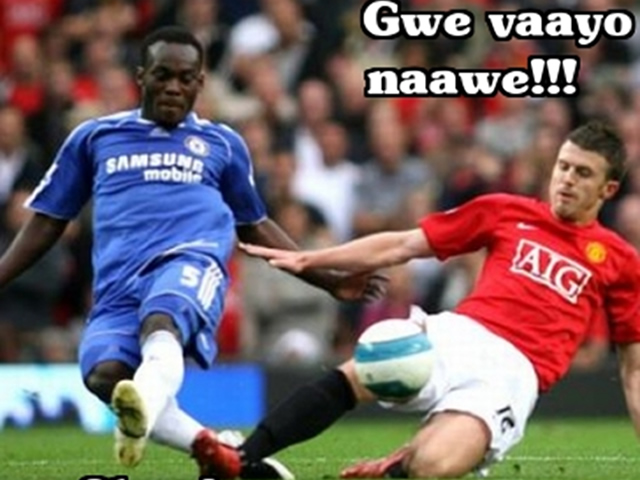 The following is an expert analysis of the Man-U vs Chelsea match from a leading international soccer critic who has reviewed thousands of matches in his mind. So he’s legit by all standards.

I can understand Arsenal’s loss because when they started that match, they weren’t overtly specific about their intentions. So right from the match’s start, we didn’t know for sure if they had come to win or lose. We didn’t even know if they had come to play. They just came in and started kicking the ball.

But Chelsea had come with clear intentions to beat Man-U. I saw it in their eyes.

It was quite stupid because they went into that match knowing so well how Man-U’s selfish players prefer kicking balls into other people’s goal posts instead of theirs. That’s not the kind of team you want to play against and that should have been the first sign to keep Chelsea or Arsenal away from anything to do with Man-U.

They have their own coach, their own stadium, their own supporters and their own goal posts. It’s why I just can’t seem to figure out what took them to Man-U. Are they that greedy that they want to just share other people’s things?

I saw that match starting and from the look of things, Man-U had really done nothing to Chelsea. But there’s a weird way the Chelsea players kept insisting on kicking a ball that had essentially done nothing to them into Man-U’s territory. So in defense, Man-U kicked the ball back over and over and over. But every time they did, Chelsea kicked it back. It’s like they had some inexplicable grudge against Man-U. I strongly believe Man-U won that match in self-defense.

If the Chelsea players were serious about beating Man-U, first, they shouldn’t have entered the pitch with names like Bosingwa, Mata, Lukaku and Meireles. They should have left those names in the locker room or with the coach before the match started. Such names, if not carefully concealed, always get you beaten.

Secondly, I think the referee was biased. A good referee would at least pull the Chelsea players aside and ask them if everything was okay at home. But the guy clearly didn’t care. You can’t say Man-U won the match just because they had more goals. That was very unprofessional.

And you can’t keep blowing the whistle every time the ball flies off the pitch. It could have seen the loss coming and wanted to stay out of the game.

You know what I think? I think that Man-U players are frustrated because they don’t have real jobs. And you should never try to compete with a frustrated man. He has nothing to lose. He’ll just keep kicking the ball into your goal post with no remorse, whatsoever. So the best thing to do here is for all the loser teams to get together, collect some money here and there and try to find the Man-U players some jobs for basic survival. New Vision and Monitor normally have job pullouts. Start with those.