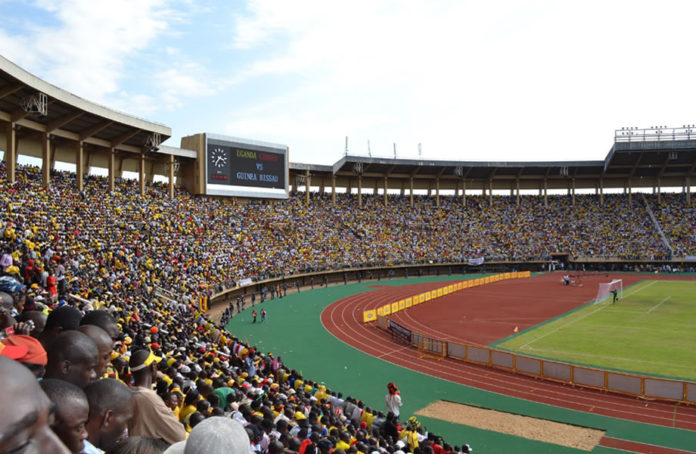 The Uganda cranes are set to beat up visitors from West Africa this weekend. It has been advertised as a soccer match but the Cranes have been planning to soccer it to the visitors for quite a while now. The different soccer pundits here at ULK had this to say:

If Rihanna played against the Cranes, however…

Anyway, we shall not call upon Ugandans to support the Cranes because those who are not patriotic have already been teargassed (a bit of political humour there. Heh.) and everyone left knows the drill, so let me address this to the Guinea Bissau readers of ULK. These are the reasons why you losers should support Uganda Cranes.

Reason One. You are dead.

Kagoda. You know the name.

Kagoda has been seen in the training camp. If he is goal keeper, you should support the Cranes. It’s going to be something nil. Do you know how many bullets Besigye stopped after this guy got into the game? Exactly.

Reason Two: We Are Unbeatable.

The team has been going through rigorous endurance training, including playing overtime matches against each other in high heels. You can’t win. Support the Cranes. Susan Ochola De Roy, a mainly useless woman who has a lot of money and therefore gets attention from the press, is reportedly impressed by the stamina and agility the Cranes players and she says, well, she says “I have a lot of mouth” and “I love alcohol”

The word “Bisawo” in many local Ugandan languages means “scrotum”. Whereas the word Cranes in English means a nice-looking bird. Support the Cranes.

Deep end soccer analysis. The stuff that goes well with a beer and Simsim balls. But the analysis does not end here. Enter Streetsider, juggling a ball. A soccer ball.

These Bisawoans do not stand a chance for various a reason, Reasons be various. For example look at me juggling this ball while I type this post. I am typing in mid juggle, that is a like half a computer key per second. You think that is badass? Guess what, when I went to the Cranes training camp, there was a guy (a) juggling two balls while (b) a random groupie was gurgling two other balls as (c)he finished a zinge of Ug Waragi while (c) doing long division sums out loud back to back.

Oh yeah, and he isn’t even on the team. He is just the guy who cleans the shin guards. You Bisawoans be there.

Reason Five: The Lake is near

We have gotten better at bewitching. Those days we were just novices. We have been to the lake (which lake btw is even bigger than your whole country) doing our distillations. You think this swagger is for nothing? Ever seen a football burst out laughing just before you kick it? Imwe numu zana zana.

For us here in Ug we are hard chaps. Think about it, our president is a gangster, he even raps. Our national beverage is Royal Vodka, we dodge bullets on our way to work, we eat nsenene and worse, hold up there is a picture I need to in-sss-eee-rrt…. there we go!

We have Angella Katatumba, of late this lady has developed this habit of singing national anthems. After she sings it, you Bisawoans will be so star struck by her awesomeness you will just stand there just. She will fizzle your brains my friends. And like her, most Ug chicks are hot. If you want to get with any of them you will have to lose that match. Believe me, it won’t be up to you.