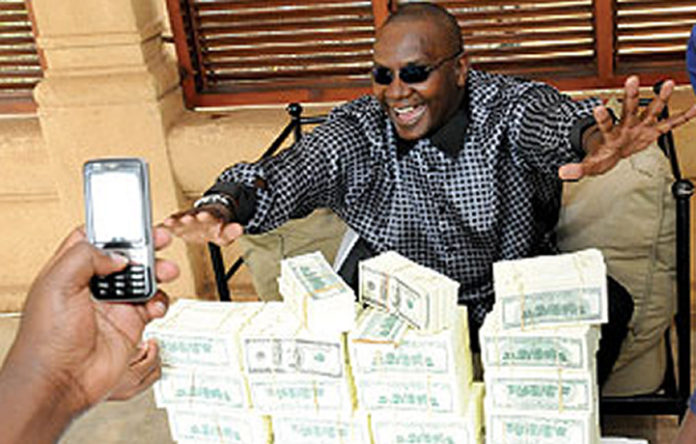 Michael Ezra a billionaire, freelance megalomaniac and CEO of Shady Sente Inc, one of the largest fraud conglomerates in the region recently issued a particularly rubbery cheque to National Bank Uganda. He then fled to his underwater villa at the bottom of Lake Victoria. Reports have it that he currently spends his time either contemplating his navel or offering languid middle fingers to anybody who dares to have an opinion.

This scandalous incident followed a mere week after he invited the entire national media to a press conference at Emin Pasha hotel and then publically bitch-slapped the lot with 7million dollars in cash.

That piece of back handed kiss-my-assery created a small impotence epidemic at a certain leading daily. Now following this development, the national media has taken this slip up on Michael Ezra’s part to declare war. The campaign (we are informed) has been dubbed; he is a goner like my boner.

“This is good for morale,” said a visibly excited executive at afore-suggested daily. People around the office have been bored and depressed. Solitaire can only go so far you know.
“We’ve got all sorts of ammo piled up.” Said Mr. Simira Shya!, head of the Take Down Michael Ezra Task Force (TADOMETS for short). “For instance we have a former butler who will testify that Michael Ezra is actually a pussy who listens to Dolly Parton, watches The Notebook at least twice a month and uses apple scented lotion; we have all kinds of dirt. This guy is a goner.”

TADOMETS has also recruited an army of twelve of the most recognized layer hens in Kampala. These hens are liberating eggs around the clock to fill up the quota of trays required before the villa under the lake can be stormed.

“We don’t know those things of Interpol, we leave that to police, for us we bewitch. It is all part of our bid to support local talent and enterprise, Corporate Social Responsibility if you will.” explained Mr. Simira.