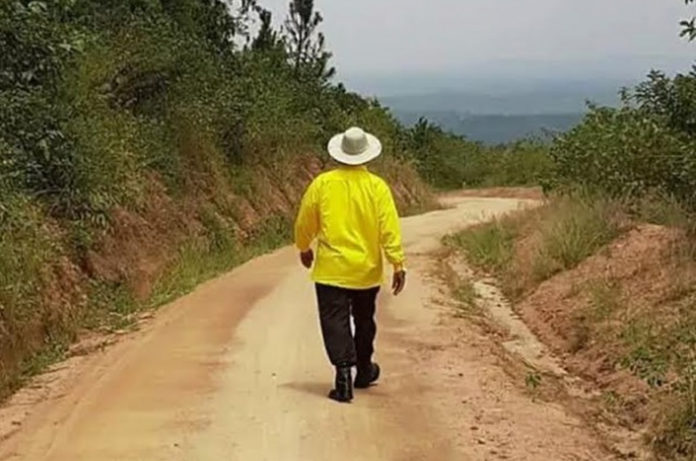 The president has declared his latest term not for jokes, those things are for former V.P Bukenya. Meanwhile, someone should offer that guy a job in Akandolindoli, he is idle these days but i digress. Back to the main point, you may be there thinking, “How do those things of kisanja hakuna muchezo touch me?” First of all, you need to think in correct grammar, i.e. “Why should I be concerned with quixotic presidential statements like Kisanja hakuna muchezo” Secondly, this is why you have to be concerned;

You know those days of Besigye coming from outside countries or coming from Kasangati to town with crowds of people. That stuff was for last term, this time it is for grabbing him just as the airplane enters Ugandan airspace. Sources say that Besigye was actually parachuted off the plane by special commandos who were trained by Chuck Norris and Rambo. Besigye was too stunned to believe what had actually happened but since he didn’t want to die in his own movie, he told people that he had been hijacked when the plane had landed which, according to our sources, is more fiction than a Kampala Sun news headline.

Are you a government employee? Be scared, kisanja hakuna muchezo is coming to the office or hospital near you. Ask those Nakawuka health workers. Do you want to pee? Do you want to buy airtime from maama junior`s kiosk? Do you want to quarrel with your ex on phone? Or you have a lunchtime date? Don’t dare move away from your desk because if the boss (and I mean the top boss) does not find you on the desk, YOU ARE FIRED!!!…..But don’t worry, it won’t be for long before you are reinstated.

Viral photos aka breaking the internet (the East African one)

Previously, the president`s photogenic moments fell into two categories. When he is addressing people at Kololo, Statehouse, Campaign rallies etc. The other is when his hairline hadn’t yet receded further back on his head and was making statements like “the problem with Africa is leaders over-staying in power”. But with kisanja hakuna muchezo, the president is a viral phenomenon with road side phone calls and power walks in the hills.