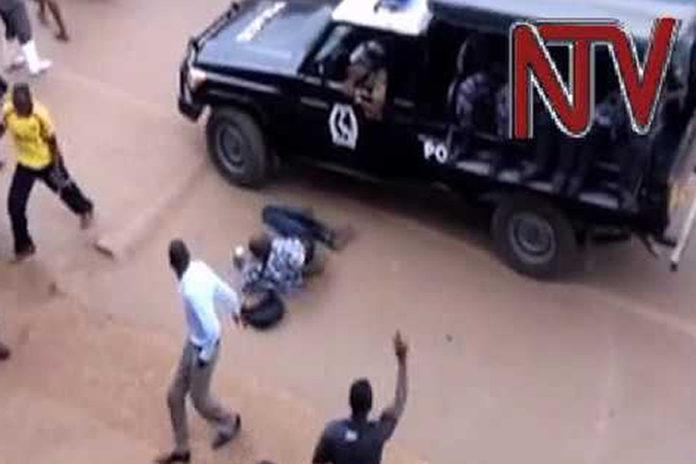 NTV Uganda broke a story involving police brutality. This in turn drained our phones’ batteries as people forwarded the clip over and over. It also created the impression that we were actually up to date with current affairs… but that’s not the story.

The police spokesperson reportedly said they would suspend the driver of the vehicle that ran over an opposition supporter. A section of the public got upset at how lenient this penalty was given that not only was a man’s life endangered, his pants were made dirty.

Not everyone was exhaling flames, however, as we found out when we interviewed this imaginary student.

Student:          You’re pashing on jobo, you guy. Those things of one man’s meat is another man’s gain. So, by acting as a rump for the police, I am also benefitting mob!

Student:          Spot! I’m not studying law or those things of courtroom drama, but from Suits, I know they can’t give a young one and an adult the same punishment.

*editor’s note; Suits doesn’t say shit about that. It actually encourages people to cheat in their exams and use the expression “gaddam”.

Student:          That means they can no longer cane us brown envelopes as punishments. So if I chop morning prep, guess what?

Student:          Exactly. Imagine I went back to my zeeyi’s and told them I had been suspended. Do you know what they would do?

Student:          As if sosh? It’s like the sense is trying to dance squeeze with those words and is afraid of rubbing its body against the supple curves of the letters?

Student:          Anyway, my point is, I can chop morning preps, skive classes, escape from school, hug visitors from other schools…

Student:          As in feel their bodies against mine…while I hold them tightly to make sure they don’t bolt, what… and I can even touch student teachers’ bums.

Student:          That would depend on the student teacher’s weight and size. . . and willingness to be suspended. These teachers can be very difficult. Shocking as it is, many are really willing to spare the rod.