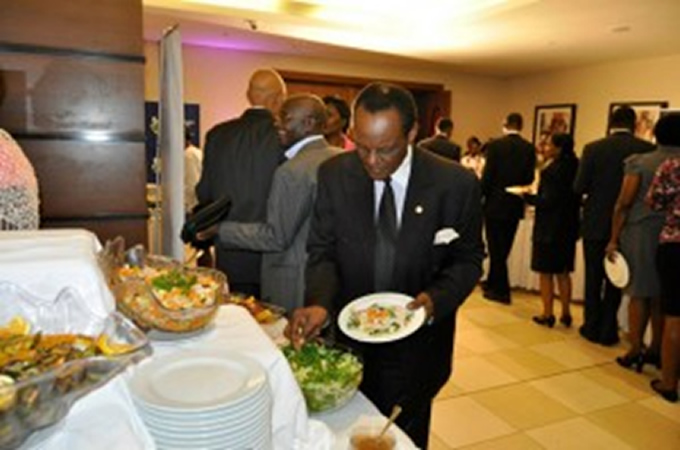 So, on 0ctober 24th, Uganda’s largest piggy-bank, the National Social Security Fund, held The Torch awards at the Sheraton Kampala Hotel to recognize the work done by private institutions and individuals. Over 100 people and institutions registered for nomination (including those that thought they could piece up a project in their briefcases and hope it seems legit on nomination night). Their efforts were commended but only those projects that were found legitimate were awarded. Five winners were awarded from the 15 nominated projects. Seeing how the numbers were narrowed down, the awards themselves come off as legitimate… which is a good thing I think.

Anyway, the night kicked off with a cocktail party complete with drum wielding traditional dance troupes; you know the ones that are paid hefty sums of money to help keep the atmosphere semi apocalyptic! It is here that sharks draped in business garb and members of the fourth estate (yours truly) downed a good portion of your money at the open bars. Thankyouverymuch.

After that guests were ushered into Sheraton hotel’s Victoria ballroom. And it is there, three tables from ours, that Prince Wasajja, HRH Naginda, NSSF MD Richard Byaruhanga and several other NSSF staff, clad in their well pressed old people clothes and drinking from white chinaware sat and watched the proceedings of the nigh
The stage was already set and waiters were waiting at snapping distance. I was served some stuff that tasted like salty porridge with mushrooms in it. I had to tell myself…
“Self, you are at the Sheraton, what is the worst that can happen! Come on don’t be local, just eat the damn porridge!”

The hosts of the evening were Roger Mugisha and UBC’s Jane Kasumba (I wonder what she is still doing at UBC with her gorgeous NTV legs). The duo endeavored to stay away from that accent thingy that has become a fad with Emcees nowadays, and I believe they did a good job. And isn’t it amazing how Roger Mugisha made the switch from Slim Master P to Johnny ‘freaking’ Cash! It is actually that fact, of him transforming from a casual worshiper of Satan to a perfect Christian suit that makes him a fascinating MC.
“We receive over 20 proposals a week from people asking us to contribute and offer support to all kinds projects. Including their weddings…” says Richard Byaruhanga, Managing Director, NSSF.

“The Torch Awards is something we came up with so that we help those projects that we feel deserve to be supported, and also cut down on the paperwork— this is a new and unique form of CSR and we hope other companies will emulate this,” he added.
Dinner was served, with Qwela band belting off some of the most awful sounds I have heard at a dinner. Ever. Okay, not ever! But it is one thing to stay calm and not do a thing even if you very well know that you can just simply walk up to this guy and punch him in the mouth.
I must commend the Sheraton Hotel for having an entirely local menu that didn’t suck! Awards were presented to winners, and we heard speeches from HRH Slyvia Nagginda and Comedian Herbert ‘Museveni’ Segujja. Segujja’s impersonations of Museveni are something of impressive, but they also keep you on the look out. I mean what happens after the real sevo walks in…