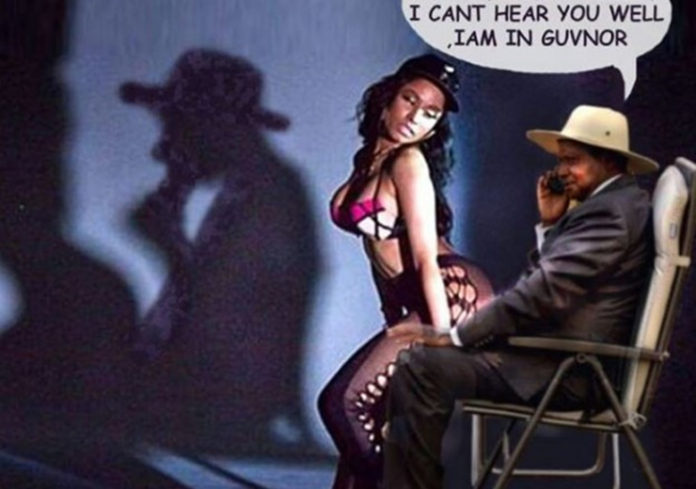 Our president has gone viral; the iconic photo of him by the roadside should by now be framed in the Uganda museum for the benefit of generation as they discuss the history of Uganda and behavior of its presidents. We at ULK convened a crisis meeting to discuss this momentous occasion and fabricate reasons as to why the president decided to have a phone call by the roadside. Seven reasons (wink wink) were identified by our brilliant staff and are detailed below.

We all want to remember our glorious past escapades and we can all agree, the president had a very adventurous past. He must have been passing through Isingiro when suddenly a bout of nostalgia hit him hard, those days of sitting and sleeping under the stars. But of course our president can’t sit on the ground anymore (those days he was a rebel, sorry, revolutionary but now he is a general) so he had to get a chair. And he could not just sit there and do nothing (that’s for crazy people and presidential advisers) so he got a phone and called some of his remaining bush war comrades to chat about the bush days.

Unreliable information reaching us is that the president indeed likes eating rolexes. Recently however, he realized that Sula, his rolex guy, had not been putting enough tomatoes and onions in his rolex. He therefore had to sit by the roadside and call Sula to make a complaint about his rolex making skills and threaten to leave him if he did not change his ways. After Sula promised to add more tomatoes and onions, the president them made an order and instructed Sula to deliver the rolex to state house for his supper.

Do you know what is rarer than Ziza Bafana singing things that make sense? It is MTN zone being at 100% during the day. As the president approached this particular spot, he realized that MTN zone was 100% so he had to sit and witness this miracle. Also, he tried moving to another spot but zone just kept going back to 30% so had to sit in that spot and utilize the opportunity.

If you do not know who Lyanna Mormont is, congratulations are in order for having arrived safely on earth from whichever planet you have been on. The next step as you get used to earth is to go to Zai plaza and get a pirated copy of Game of Thrones, season 6 from Papa`s video shop. Then you will know why the president had to sit down on the roadside as he talked to the ruler of Bear Island in Westeros.

There are those times when group whatsapps are on fire, everyone is chatting and jokes are flying around or two people are going at each other in a group and the insults are flying faster than you can say, awkward. This was clearly one of those times and the president being distracted by the sound of speeding vehicles decided to have a sit and properly participate in the WhatsApp chats.

Dude runs an entire country, he must get tired also. He just wanted a few minutes to rest his soul and mind and what better way to do it than sit by the roadside and breathe the clean countryside air as you answer a few phone calls.

Mbu, after realizing that Besigye had been set free on bail from jail, the president took a page out of the how to steal other people`s thunder playbook…if you want people to ignore your rival`s being released from jail, take a photo seated by the roadside in a bush and making a phone call. That will get people talking about you more.