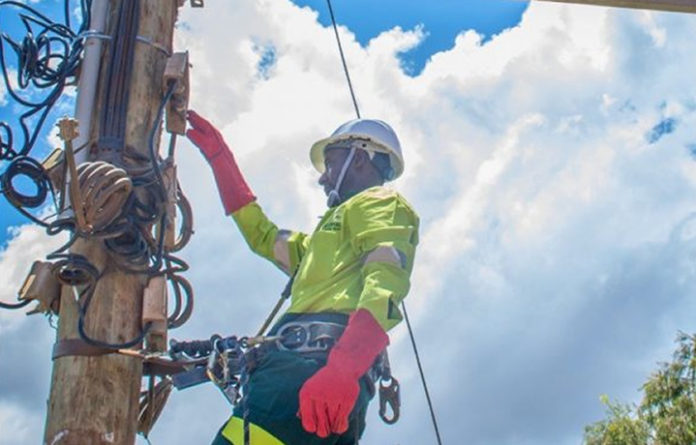 That Sunday, escaping the chokingly dull atmosphere at lunch with the relas, Trish had gone to watch her cousin play football. It was there that she slowly became aware of Paul.

She had categorised three quarters of the boys on the pitch according to the 360° system she and her bestie Winnie deployed, (and yes, she could tell their employment status despite the fact that they were all consistently covered by Kampala mud) when she came upon him.

She watched him running gingerly across the pitch with an awareness of every splash of mud that landed at the base of his legs. He scored a very average 180.

Meanwhile, Paul too had spotted her, while trying to remain within but at the same time outside, a certain distance of the ball. He had determined that he would find an excuse to go and talk to her afterward since she looked like she might be pretty.

That way the afternoon, which he had originally hoped would involve nothing more vigorous than sitting in front of the TV with his hands down his trousers, would not be a complete bust. A new “friend” whose calls he had successfully dodged for 3 weeks had appeared at his door and shamed him into going to play.

She could be pretty, then again she could have a face like a pair of goat’s testicles, he thought anxiously as he approached her and the box of mineral water someone had kindly deposited beside her.

He actually sighed and half-smiled when he found with relief that she was not, in fact, hairy, malformed and malodious. She had a really nice… She looked like she had an interesting…

Trish watched him approach and thought, “he’s alright… I guess?” His name was Paul, she learned and he also worked in a bank, though in the legal department.

There was nothing actively unpleasant about her, he puzzled out, as he watched her talk about clothes, shoes, her ‘galfriends’ and The Hostel. On the other hand there was nothing he could tell the perverts in IT when adding soup to the story on Monday morning. Not a single outstanding, big, beautiful muscle, organ or pair of glands. She was neither flat nor bintuful.

She appraised him and dismissed him quickly; small feet, smaller salary and the smallest pair of ears she had ever seen. The next weekend they ran into each other at a house party and she ignored him at first.

Later once the party had long run out of mixers, they found each other in wet, humid embrace behind the fridge. After they were inelegantly interrupted by a puking, crying galfriend he invited her to his place to “watch a movie” the next day. What the hell, Trish thought, he could be fun.

When she finally made it to, after getting lost on a boda who then overcharged her, Paul opened the door to a house that was darker than the evening outside. He hugged her clumsily and went back to lighting candles at the table.

“Oh no. UMEME?” she asked, wondering not that of course, but whether she should take off her sandals. They had a multitude of straps and would make a quick exit complicated.

“Yes, but my laptop has enough battery,” as he brought the candle towards her the light licked her face prettily, her skin glowed warmly and her round eyes reflected the flame back to him. She actually has a pretty face, he thought. Trish sensed a difference in his approach and smiled, blooming uncertainly like a budding flower. Especially when she smiles like that, thought Paul.

Paul then pulled out his ace, a bottle of champagne that his mulokole boss had given him, he had kept it since Christmas hoping for a woman to impress with it.

Trish was impressed. She took off her sandals.

He had got the movie because his video guy had told him chicks love it. “They get wet in more than one place,” he had said, to be specific, but Paul found himself moved by the story. Tears squatted in his eyes and he was grateful for the dark. He put his arm around Trish as she dabbed at her tears girlishly.

By the time the credits rolled they were kissing and hands were exploring and shirts were being tugged off. When they knocked over a candle they decided to take it to the bedroom, Trish giggling giddily as she tripped over her own strappy sandals on the way.

Taking advantage of the forgiving candlelight and bubbly, tipsy courage she did a little striptease that she had imagined in her head many times but had never been able to perform for anyone except her mirror.

They proceeded to have good, unselfconscious sex.

Afterwards they talked and with the candles out, unable to see her facial expression and not having to control his, he found himself saying things he had never shared with anyone. She wrapped her legs around his torso and placed his head on her bosom and sighed with maternal concern and contentment.

Very early the next day, before Paul and the sun had really woken up, she kissed him goodbye and disappeared like a good dream. She spent the day gushing about him to her galfriends on gtalk and squeezing her thighs beneath her desk to feel the sweet aftersex soreness and smile.

A few nights later he actually took her to dinner. They smiled at each other the whole car ride, and then across from one another, under the bright lights of the Indian restaurant and as the pauses between sentences grew longer and longer the smiles became strained and then heavy and then stopped.

He squirmed in his seat.

She cleared her throat drily.

They both looked up with great relief as the waiter approached and down with despair as he left with their drink orders. What had gone wrong? Trish wondered. In desperation she began talking about Mari Chui, a terrible idea she knew, but anything but the silence. Dear God, not the silence.

He nodded at the major plot points and interjected with appropriate mmhmms and uh-huhs, but really he was examining her face for something, anything interesting or distinctive. She has nice… ears? Her ears were small and unassuming, they did not call attention to themselves, which, surely is the bare minimum you could really ask of ears. Her eyebrows were perfectly adequate. Not sharp and aggressive nor timid or most-terrifyingly; absent.

As they left, walking down the four flights, the only sound their shoes sliding down the mall floor, they both ran into people they sort of knew, arm-in-arm with their significant others, posed against the red of the Supermarket sign like an advert.

Under other circumstances, they might have all walked by each other with maybe a smile or wave, this momentous collision of awkwardness would never have come to pass. Paul and Trish clung to the others like drowning swimmers and proceed to drag the whole encounter under a tide of awkwardness.

The sheer momentum of it caused handshakes to grasp fists, clumsy hugs to turn creepy and worst of all, that terrifying moment when two people are forced to acknowledge the other prematurely as they wait for the people beside them to finish their greeting so they can begin theirs. This should never have happened, Trish thought, as she did the are-we-hugging-left-or-right-oh-I-think-I-just-kissed-your-ear dance. With her free ear she heard;

An alarmed look came upon her face. She was at warp speed transported through a lifetime of being introduced at boring Bank luncheons, boring Rotaract marathons and boring functions with Paul’s family who probably had the same weird fucking ears that he did. Patricia, Paul. Patricia, Paul. Paul, Patricia. Patricia, Paul!

The six of them laughed the last of what had been many uncomfortable laughs at the alliterative accident and then with a wave walked away in three different directions, a little faster than was strictly necessary.

Without seeing the look of horror on Trish’s face Paul ventured into the silence optimistically: “How funny running into Chris after all these …”

Kicked Out: What Next For The Lord Mayor Lukwago?