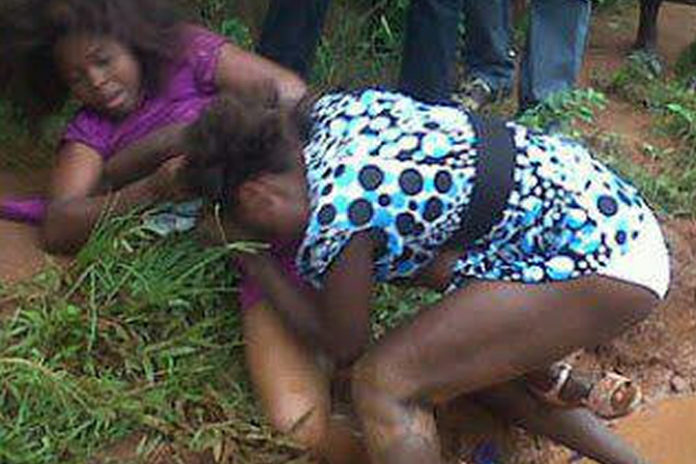 There comes a time in every young woman’s life when she must grab a bitch by the synthetic ponytail, hold her wailing head steady, and punch her in the throat.

Perhaps, if your life is like mine, this moment will come more than once. Sometimes a fellow female needs to be taught that if she does not want her boyfriend cheating on her, she needs to take her concerns to him, not me. At least her boyfriend will have qualms about resorting to physical violence.

If your life is like mine you understand that getting into fights is inevitable, not because I am some crazy banshee who drinks too much and watched too much wrestling with her brothers back in the day. Yes, my very first childhood crush was on Bret “The Hitman” Hart. Still I would much rather be sitting pretty on a barstool, sipping on something  fruity while a hot guy whispers dirty things in my ear, than rolling around in a ditch with some girl’s ear in my teeth. I get into fights because women are mean to other women.

Yes. Women are mean to other women. It is a fact that has been well-documented and sneered by men with superiority complexes to one another. It is a fact whispered to little girls crying in their mother’s laps, after the shaven-headed, vicious little bitches in her class pulled her long hair.

Girl on girl violence is most often visited upon the pretty girls, the sexy girls, the liberated girls, and the working girls. The ones you like to call cunts, malayas and whores. You think it is us versus them, hoes versus housewifes, Madonna versus whore and never the twain shall meet. What you fail to realise however, is that all of us are hookers (though only some get paid in cash).

It is not always the obvious ones, the ones you see at the bar, in the club, tossing an expensive weave over her shoulder in Equator, the ones you want to be. Sometimes we’re peeking from behind a pair of glasses, or sitting behind you in a church pew.

Yeah, I said it, all of us are whores. True I have never had to bend over, lift my skirt high and display my wares to the government ministers, MPs and tycoons driving by, but I have ever sold my bedroom skills for a hot pair of shoes or a bed to sleep one drunken night. Don’t look at the page like that, as if you didn’t promise your husband 30 nights of blowjobs if he bought you a new car. Your currency may be cash, commodities, affection or good conversation, it’s all give and take sister (whether you take it like a bitch or like a good little girl, from behind or in the mouth, I won’t judge you)

There are plenty of legitimate reasons to hate me; I talk too damn much, I don’t volunteer with charitable organisations and I have been known to use foul language in front of small children. But don’t hate me because I won’t pretend that I don’t like to fuck (and your boyfriend likes that about me). End the violence!

This message of peace was brought to you by The Hitchhiker, with the support of Urban Legend Kampala.