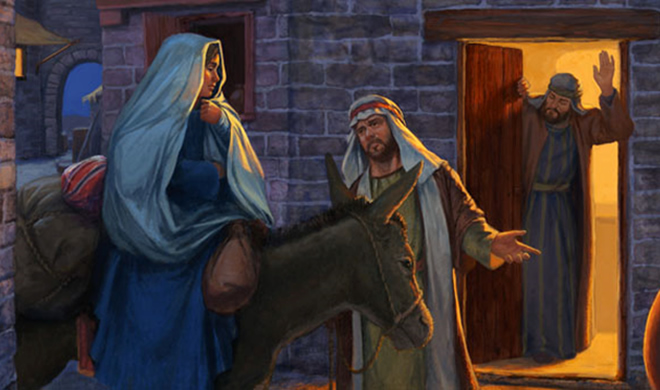 Chapter V: Flexing For A Room In Bethlehem

Honey, see what the credit crunch has done!

In a security office somewhere in Bethlehem…

“Sign up! They said! It will be a great way to channel your aggression! A lot of good that did me!”

“I know what you mean Brother Nathaniel, why just the other day I was asked to deal with an 818. Can you believe that? After all that training, I am reduced to dealing with shepherds. And then they are let off with not guilty on grounds of insanity. Turns out they were “following a star”. There’s been a lot of that astral fascination going around lately. Just the other day Jupiter and Venus were so close to the moon, it looked like a smile.”

“A smile? What foolishness is that you speak of Herman?”

“You know, when you turn your er, frown upside down. Like this. Anyway, point is, my brother says that sort of thing will never happen again. Not even in 2011 years!”

“That is oddly specific”

“Tell me about it. Then get this. He says there will be a bright star that will herald the birth of the Mess…”

The intercom on the desk cackles to life!

“Code IV!!! Repeat! Code IV! Security!!!!! Come to reception now!!!! Hey, I love these upside down ‘i’ thingies. Do you think they will catch on in the future? Is this thing still on?”

Nathaniel looks at Herman. A gleam of excitement in his eyes, “ A code IV! Do you know what that means? I can barely contain myself!”

“By the Roman gods that we suspect are pagan! A code IV is unprecendented. We are not equipped to deal with this sort of thing. This could change the very fabric of history itself. And yet, someone must take care of things. Quick! To the hotel!”

As they make haste, they are interrupted by three odd looking characters with crowns on their heads. They look suspiciously like kings.

“Hang on. Brother Nathaniel, did this gentleman just cut into the story? Can he do that?”

“I don’t know Brother Herman. These kings of the Orient possess a certain mysticism that is enigmatic in nature. I know not whether we want to deal with this now. But wait! What’s in the bags?”

“I thought as much. Very well, on your way!”

“But Nathaniel, are you not being lenient?”

“My dear Herman, what would you have me do? Write them a parking ticket? Those things have not even been invented and for the life of me, I don’t know where I pulled that phrase out of!”

Minutes later at the hotel…

“What seems to be the problem? I just found out that Usher is in town and we must deal with this ASAP”

“So you say, but we don’t see…by the unborn God! Is that lady pregnant! And is that what I think it is in the bag! This Code IV is unlike any other. It’s a sequel!”

“Yes. An evacuation order is in. er, order! Right this way madam, sir!”

“Really Joseph, you chose a fine time not to ask for directions!”

“Calm down Mary. I have faith. Something good will happen!”

The couple is promptly shown the door.

“It appears to be a door type thing. Do you think we should open it and walk through?” Joseph asks.

“Seems to be the only way this story will move on.”

And so it comes to pass, they walk through and seek accommodation on the other side of this ‘door’ thing.

A couple of houses later…

“Yeah. Okay look its not you, it’s me. I have no problem giving you guys accommodation, but this whole credit crunch thing has kinda thrown me off!”

Joseph and Mary look at each other. Inquires Joseph of Mary, “You think this is foreshadowing something in the not so distant future?”

Says the Bethlehem Sheraton keeper, “Nonsense! This crunch thing can not, will NOT happen ever again, not even in 2011 years! But to show you I mean you no ill will, I will let you spend the night out back. I have a good feeling about you!”

“Thank you kind sir! May the Lord shower blessings upon you!”

“Er, yes. Now come, let me show you your quarters before those census people come back and do a recount. Where do they think we are, Florida?”

“Really! What have you seen that could possibly be worse than this?”

YES! You Too Can Be A Deep Political Pundit!