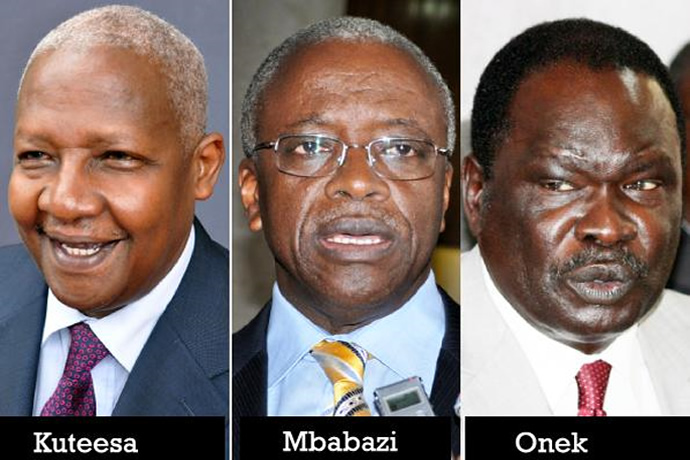 It’s 9.06am and Foreign Affairs minister Sam Kutesa is seated alone in the living room caressing a bottle of oil, when Government Chief Whip John Nasasira walks in.

Nasasira: Don’t be so hard on me, man. I’ve come with problems.

Kutesa: What, have they sent you to cane me?

Nasasira: Yeah, but they don’t pay me to cane people. They pay me to swindle public funds.

Kutesa: Even me. I wonder why they give us different ministerial titles yet we do the same thing.

Kutesa: Talk on it. Anyway, what are you doing out of office early?

Kutesa: No way! Where did you put yours?

Nasasira: I put some in the car and I took some at home to use for cooking.

Kutesa: Dude, you know the oil is unprocessed, right?

Nasasira: Oh. That should explain why…can I use your toilet?

Kutesa: Mwesigwa is still inside.

Nasarira: You let a junior minister use your toilet?

Kutesa: No, for him he’s still a two-star swindler.

Nasasira: A two-star swindler at such a young age. Such a focused young man.

Kutesa: I know. And wait when they tie him to the oil deals and he goes to prison.

Nasasira: Whoa! That will give him three stars!

Kutesa: For real. And the big man will just promote him to vice president I think.

Nasasira: Respect! But man, what now? What’s the next move?

Kutesa: We go to prison, we bribe lakini Geoffrey the prison warden to make it look as if we are suffering, then when we come out, people will cheer for us.

Nasasira: Ha! When Hillary was promised kiboks from northern Uganda here? And you know how those ones hurt. Ye where’s he?

Kutesa: Stupid fool! He’s there in the corner. Fool! I hear he won’t talk because some people at simanyi Urban City are recording us. Gwe Neckman, don’t be stupid. Onek! Wake up, you fool! You said the people spying are from where?

Onek: ULK. Go to www.urbanlegendkampala.com right now and see if you think am lying.

Kutesa: Hehehehe I don’t know how this fool even qualified to receive a piece of CHOGM money. I think he’s the one who made them catch us even.

Onek: But why do you keep hating on a fellow swindler like that? We’re blood brothers, man. It’s not cool.

Nasasira: Gwe! I think the fool is telling the truth. Come and see…

Kutesa: Shit! And it’s live! First say something and I see?