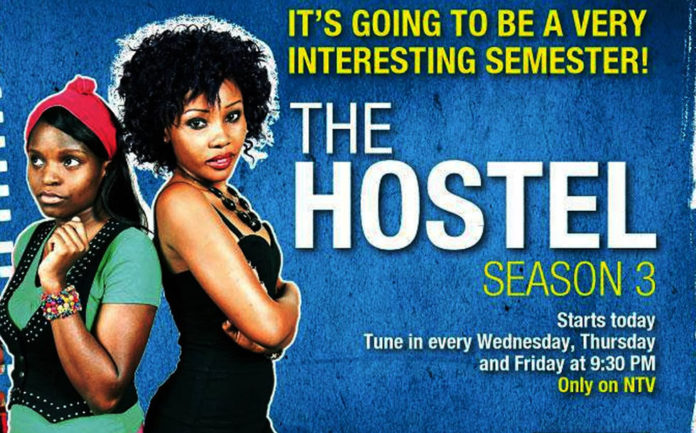 …If you don’t count the moments when it drags, and the parts when the ad libbing is a bit off track…

You know what, the second season of the Hostel is back. Crack cocaine – this thing addicted us last time, and now look, it is back to repeat the offense.
With new ingredients moreover.

Sober, Odoch, Twine, Hope and Annette are joined by two women with remarkable things on their head this season.

There is MacConnor, a Kenyan student who is here to illustrate the need for East African coorperation by symbolizing how the Kenyan education system is so sorely lacking that it’s up to us Ugandans to teach Kenyans how to speak in English.

MacConnor, who is also the Last Airbender, starts her speeches in English but as soon as the director’s back is turned, dives directly into her mother tongue. She spends half her screen time speaking in Kalenjin, which no one in the hostel understands. We hope she is not enrolled in the university to study Communications.

Joining the cast as a full time member is Martha, the Wig Kahuna. Last season she was seen every now and then carrying a large, flamboyant, noisily-coloured and– let’s not mince words– morally reprehensibte wig in and out of New Age Hostel.

She retired last season’s wig, Or gave it back to the circus clown she had borrowed it from, and is now sporting what would make more sense as part of a carpet.

Wiggy Smalls is now a full time cast member, as both resident of New Edge Hostel and Twine’s girlfriend, petulantly asking for a tub of shit to be dumped over her head in both roles. You watch and see how long before you want Anette to shank her the way they taught her to do in prison.

The first three episodes have not established much about Odoch Jasper, aka the Alan Shore of this programme, Annete is trying to deal with being an ex con who has to live with The Notorious W.I.G. and her a colossal brattishness, Arach is looking fine like didn’t you know and Sober is just the way you left him, though he has a radio show on XFM now.
That’s the update I have for you. Now, like this post so I can pay my electricity bills.