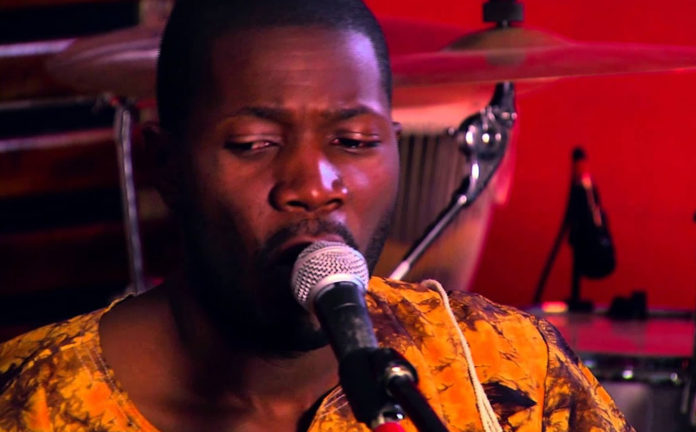 Music prodigy Herbert Kinobe’s immense love for the Kora has gotten some pundits calling him a West African sell-out. But even they cannot help but applaud his talent on the 21-stringed harp especially the passion with which he plucks the instrument. If only he tinged the sounds he outputs from the instrument with more East African rhythms! That would please his West African mentors more.

That said, Kinobe is still grounded in his roots given the other instruments he plays at his gigs. There is the akigo (thumb piano), adungu (harp), ndingidi (tube fiddle) and raspy ntongooli (bow lyre). Tuesday night’s gig at “The Maurice Kirya Experience” (TMKE) was proof yet again that he is one of the crusaders of Ugandan organic music although the West Africans would easily lay claim to him. The bragging about having renewed his passport thrice in the past year aside, Kinobe was in tip-top shape yet again, playing comfortably in a somewhat unusual venue. Rouge is usually a hedonists’ haven, a place that prides itself as tequila and pina colada heaven. Together with his band, Kinobe gave the place a complete makeover that even left the waitresses friendlier this time. Concept owner Maurice Kirya was all smiles and January’s edition will be a hard act to follow. Kinobe and Soul Beat Africa set the entertainment bar so high, not bad though for a month suffering an entertainment drought. Kirya would have him any day to rekindle the vibrancy that TMKE ought to be.

For patrons that had seen Kinobe perform at the rather “classical music-ish” do at Alliance Francaise the previous Friday, Tuesday’s concert was a marked departure and the real African thing. Friday’s concert was too tailor-made for the Caucasian expatriate crowd. It was too “lumbe”, a tad funeral-ish and too acoustic although percussionist Samuel Bakkabulindi earned pips for great percussive playing. Tuesday’s concert was very up beat it seemed to have ended too soon. The full band was in tow this time complete with three background vocalists; Tusker Project Fame I’s Paul Lwanga Masajage, Battle of the Souls leading man Mathew Nabwiso and Lillian Kyabaki rounding of the harmonic voices, Michael “Santana” Ouma on the acoustic and lead guitars, “Producer” Allan Okia on bass and Jude Mugerwa on keys. Drummer Ambrose Tugume was also in the house stealing most Bakabulindi’s laurels from the previous Friday. Tugume is a class act hitting the acoustic drum skins and cymbals in away that complements his smiley gestures.

Kinobe who also doubles as the outfit’s lead vocalist did mostly folk tale renditions and those chants kids sing during physical education sessions. His song list included Ekibobo (Kiri Munyumba) a song that lures kids to get into a house and go on a treasure hunt of sorts, Lucejjera –a song that chronicles a locust invasion in a time gone by but also paints the taunts a village clown endures when he dons a fancy pair of trousers. There was another about “beating waters” probably one of those Luganda songs that teeters on the brink of being profane by cleverly hiding its raunchy lyrics in imagery. C’est Vrai, a French/Luganda song capped the night, its zouk-rhythm a very appropriate way for the band to say adios with the promise that they would be back soon. Kirya promised a Kinobe/ Soul Beat Band “encore” at TMKE and the audience will sure love more lecture-like insights into revelations like the fact that no African language had an equivalent for the word “music”. Maybe Kinobe will be less a West African vehicle of cultural imperialism a la the Kora and that miniscule “underarm” talking drum he plays. Meanwhile, Kirya has the brain-wracking task of finding a February artiste that will top Kinobe’s 2009 TMKE year opener.