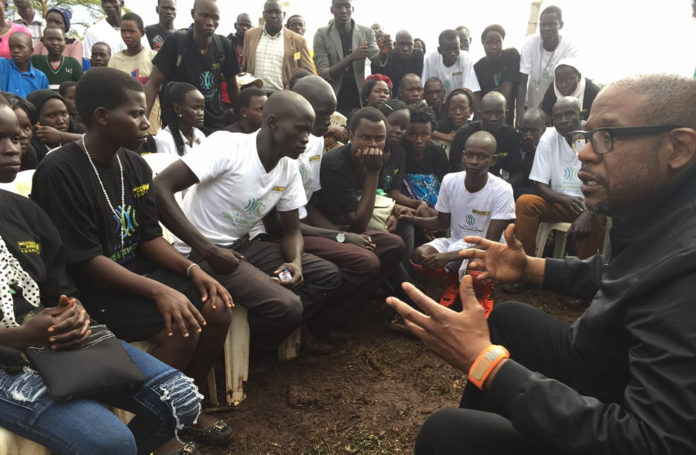 Hollywood Star Forest Whitaker has been impressed by his second stay in Uganda. This follows the American Actor and Film Director’s recent touristic visit to Uganda to help empower youth through his ‘Whitaker Peace and Development Initiative.’

Whitaker who Starred in movies such as South Paw, Last King of Scotland and others, arrived on Monday and has been in areas of Acholi, Northern Uganda.

Forest Whitaker led a visit of the Kiryandongo Refugee Settlement in northern Uganda where the Whitaker Peace & Development Initiative (WPDI), recently started a new branch of his flagship program, the Youth Peacemaker Network (YPN) to empower young people from both the camp and the neighboring communities. Mr. Whitaker has been active in the region since 2006 and has recently expanded the YPN to refugees from South Sudan, based on the successes and lessons learned on our programs for young people in the protection of civilians camp for internally displaced people in Juba.

The actor took to his social media to reveal how it feels good to stay in Uganda in additions to sharing his favorite moments like the youthful Acholi’s dancing to the traditional Rakaraka Dance.

Today, he visited Kiryandongo Refugee Settlement to train the youth of beith there for each other.

“I was uplifted by the exchange I had today with the youth trained and supported by @connectWPDI in the Kiryandongo Refugee Settlement #Uganda – they are amazing change makers!” he tweeted today evening.

This is Forest Whitaker’s second time in Uganda with his earlier visit back in 2017, where he participated in a series of activities to support young people from Northern Uganda and South Sudan.

His first visit was during the shooting of the popular movie “the last king of Scotland” in which Whitaker acted as Idi Amin Dada, the past president of Uganda. He is also one of the most popular actors from Hollywood most known to Ugandans.