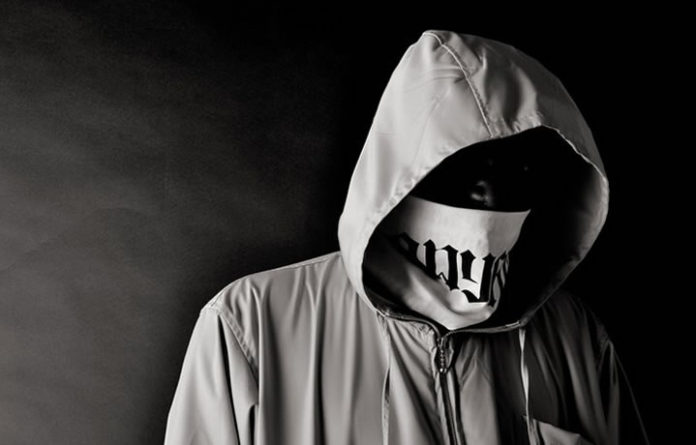 Enygma is fast-growing in reputation to be one of Kampala’s favourite rappers, even though we don’t really know what he looks like. The man always performs with a mask on. We got suspicious and went to investigate.

A: I am a symbiotic cyborg sent from the alpha centauri galaxy in a parallel dimensia dimension. I am known as Enygma because my true identity is not known. Even my identity card doesn’t know me.

Q: Is that the same planet as Straka? was she your neighbour? Do you guys meet and bond? Wait. ARE YOU STRAKA?

A: My identity is irrelevant. Music is aural pleasure and not optical. Unless some people possess the ability to view soundwaves with the naked eye. Therefore, what I look like or who I am do not add or take away from what someone hears on the track. If my face really did matter, I would have zero fans. But I have a lot more than zero fans almost all of whom have absolutely no idea what I look like.

Q: Why do you be there rapping?

A: I realised that I wanted to rap was when 2pac died. Such a fuss was kicked up that I decided to hear some of his CDs. I was blown away. This was not Vanilla Ice or MC Hammer or Will Smith or Kris Kross. This was real, gritty, thug poetry. From then on I knew I wanted to rap. I actually penned my first verse in 2001, then in the same year I quit to focus on books and only started writing again in 2009 after coaxing from friends.

Q: Do you get tired of people hearing that you can rap and then telling you, “Eh, you can rap, eh? First rap a bit and we see.”?

A: It actually depends on who’s doing the telling and the mood I’m in. Sometimes I like nothing better than to randomly break out into song, just like a a Broadway musical! Other times I feel like the court jester being pestered to sing for his supper…

Wait are you asking me to rap now? Okay.

You ought to panic, if you see me with Urban Legends/

I’m so fly, I’m the guy who drops turds on pigeons/

Turn ignitions, you can’t keep up with a Nascar/

Q: You know we are not going to pay you for those rhymes/

Cos it’s a free style. Plus we have no dimes.

Yeah. I would have been an MC, too, except for the small matter of my being unable to do more than two lines at a time.

A: Mighty oaks, from one acorn, grow. Take care of your pennies and the pounds will take care of themselves. Little by little makes a bundle. Make a mountain out of a molehill.

What I’m trying to say with all those curiously applied proverbs, is that if you can come up with two bars, you can do 4, which means you can do 8 and if you make 8 then you can achieve a 16. I have faith in you. But I must warn you, once you join our field you become part of the competition and you know what happens to the competition don’t you?

Q: Heh heh. I sense we are going to segue into an introduction of that latest song you and your peers have been up to. So let me segue.

Enygma, since we don’t know who you are without a mask, I have no qualms guessing that you are a mortician or an undertaker or an assassin, because you recently declared that competition had passed on to the other side. Tell us more about the death of competition.

A: You are getting very close to uncovering my true identity. I’m wanted in several states for the audacious crimes of killing a beat, lyrical manslaughter and placing my competition in bodybags. So much so that my cohorts and I assembled to make a track about this called Competition is Dead. The track is especially deep because it was not only a retelling of the past, but the track itself also served as a foreboding of the future…

Q: I want to see this track. First introduce it kko like a radio dj and introduce the cohorts and please give Susan Nava mob props especially cos she’s fine.

A: The track was produced by Sam Lamara and includes a stellar hip-hop cast. Lyrikal Proof, Topik, The Mith, JB, Mun*G, BigTril, Saint C.A., Susan Nava, Mon MC, 2-Xtrim, Atlas, Pl@y, Don MC, Qrea-us, Enygma, Keko, GNL & Navio. A variety of languages were used, English, Swahili, Luganda, Runyankole and Japhadola! With such a devastating line up, it is not only the competition, but also the listeners who be dead!

Q: One last question. By which I mean two more questions. It sounds like a who’s who, the cast of this song. But if all the rappers are here, who is the competition? Is it Rocky Giant?

A: There are many good artists making great hip-hop music who are not on this track. Young Nick, JT, Lyrical G, etc.. So much as this is a line-up with big names, it would be wrong to say that these are the only good MCs in UG. But the track is already 15 minutes long. If every relevant MC was put in, perhaps the track could have been a hour long. So the question of who the competition is, is not answered by indicting every MC not on the song. I prefer to let the listeners interpret for themselves who the competition is.

Q: Well me I have decided it’s that guy IK from Big Brother. Mr Enygma, thank you for joining is this evening. We’ll just close by giving our readers where they can get a shitload of your music on reverbnation, they can also keep up with wasgono with you on your own blog, they can download C. I. D. here and we will close with Hustlers Anthem.

And now, introducing the man who defeated not only competition, but Contraception and was born with his father wearing a condom and his mother on the pill, featuring Keko, The Mith and Navio, this is Enygma and Hustler’s Night. Runtings!