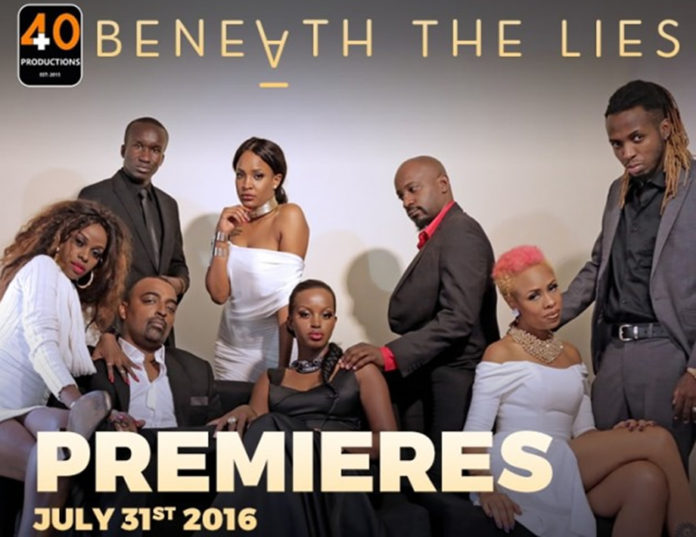 I could watch Flavia Tumusiime in anything. If she was in every program on UBC t.v, that would be my favorite television. If she returned to teen’s club on WBS, that station would stop being a relic in my eyes. If Flavia had starred in a movie about how wet paint dries, it would be the greatest movie ever made. Anyway, this completely rational obsession is what drew me to Urban t.v (a station whose existence is still baffling to me) for the premiere of Beneath the Lies, a show which stars Flavia and other human beings. I review the premiere and try to offer guidance on whether you should watch or find better things to do on a Sunday night.

The episode opens with a break-in at Amaru`s (Cedric Babu) house in the night, a ninja takes out the guards (who to be honest weren’t doing any guarding) and proceeds to steal Amaru`s laptop. Amaru wakes up in time to see the Ninja escape and jumps out of bed. Strangely, he is wearing khaki trousers and black shirt, iam not an expert but I think that makes for very uncomfortable night wear. Jumping out of bed with him is Hellen (played by Hellen Lukoma), yes, apparently whoever was in charge of names couldn’t be bothered find another first name for her. Amaru apparently wasn’t aware of Hellen`s presence in bed with him (Hellen, that is creepy) and fumes at her while he calls Abby (Gaetano) and his lieutenant, Paul (Daniel Omara). They play the security tapes and the ninja, we find out, is Kamali Amaru (Flavia) who is indeed Amaru`s wife. Why Kamali should go to all the trouble of killing guards instead of just walking into what should be her house is beyond me but Amaru asks Abby to make sure he retrieves the laptop.

Meanwhile, we see where Kamali has taken the laptop; it is to Suuna (played by Faisal Seguya but who you know as Rabadaba). This Suuna guy is a wrong character and iam instantly inclined to hate him, he is threatening Kamali because she doesn’t have the right password to access the laptop. The truly terrifying thing is that he is very believable when he is threatening Kamali, great acting by Rabadaba, (who knew!!)

Kamali is not feeling well, this is quite understandable, she had quite the hectic night on top of being threatened and then we are given a flashback of when, I assume, Kamali together with Keitesi (Natasha Sinayobye) were still young and under the care of Patrick “Salvador” Idringi. The camera work and setting of this scene is great, it captures the bleakness and unsettling nature of what is going on. Salvado is into child trafficking and sells the two girls to Suuna and back to the present day, we see keitesi bringing some pain killers for Kamali.

Next scene is a house party, Kamali and Keitesi are making their entrance and Abby immediately takes a liking to Kamali. Chemistry is definitely in the air between Abby and Kamali although a bit too much in the case of Kamali who I am assuming is being forced into prostitution against her will but hey, Gaetano happens to be a suave dude. They retire to the bedroom and in a blink and you miss it scene, they are done with the “bedroom activities”. Hopefully, everyone got their money`s worth. However, this had been a trap, Abby and Paul already knew Kamali and Keitesi were thieves but Abby still went ahead and got himself some stuff (what a douche!!)

Fast forward to the morning and after what was a night of vigorous interrogations, Kamali tells them where the laptop was and Paul after realizing his boss`s questionable behavior i.e. sleeping with a suspect directly calls Amaru to pick his laptop. We get a scene of Amaru interrogating his wife and threatening to shoot her…somehow I don’t believe him probably because Rabadaba is much more convincing in threatening physical violence than Cedric. Iam intrigued by what happened between Amaru and his wife though and I look forward to finding out.

When the laptop is given to Amaru, it has been wiped clean and then he goes into some speech about being a hunter, wanting to hunt, blah blah blah and thus ended the episode. Maybe Cedric`s acting will grow on me, it seemed lackluster in the premiere.

Overall, an okay start. There is enough mystery and intrigue to tune in again and you will not cringe all the time over the acting. I hope there is more screen time for Hellen, Salvador and Rabadaba plus more romantic scenes between Flavia and Gaetano.

Meanwhile that flashback scene, how come only Flavia and Natasha grew up? Could Salvador and Rabadaba be vampires? Now, there is a twist for you…