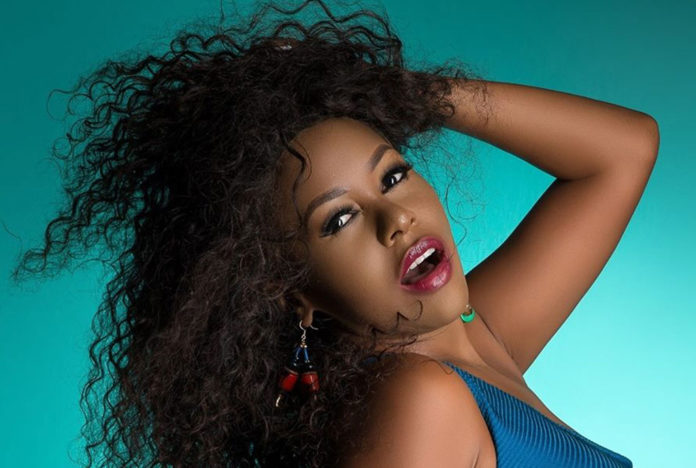 You are used to me doing real interviews these days. For example, the other day I interviewed Enygma. Then I interviewed Daniel Omara aka Odoch Jasper aka star of The Hostel aka rumored boyfriend of four or five different women in Kampala and surrounding areas. I am about to unleash for you yet another interview, this one with … eh. I can’t say. There might be people in the matooke plantation listening ready to jack my swagger. You go twelve steps into the plantation and you will find How To

That was a cryptic barb. It was meant for them, not you, my dearly beloved reader. You, DBR, just be there, make yourself comfy. I’m bringing nice interview soon any time.

I was saying… I usually do real interviews, but this time I will not be able to. I’ve been conscripted to interview Sharon O Nalukenge, currently serving her country in Big Brother Amplified Bikozebitya, but there are two reasons why no one has scored an interview with her yet.

Aate I was poised to give you a very powerful and moving interview, one which would expose the inner Sharon even better than the little skirts she wore during Obsessions performances. One that will show you the Sharon behind the make up, and I don’t mean questions like “turn around please”. I was going to get psychologically probing questions that delve deep into the psyche and unearth the secrets of her soul, reveal the mysteries of her mind. But then there are two reasons why I stopped trying.

But I have to run an interview of some sort. That’s what it says in the headline. So what I have decided to do is ask questions to somebody else.

Q: Sharon, you have a very distinct way of speaking. It is very unique. Very rare. What does it sound like? Since you are not here, I am going to pass that question over to Paul in the corner. Paul, what does Sharon O sound like?

Q: Sharon, a lot of us remember your earliest speech, the one you made upon your entry to the Big Brother House. You said to Eek, and by the way, fuck that guy—I hate him so much—that you were a fan of “Gary Turner Carroway Goowear”.  So I guess what I would like to know now is this: if you were to answer the phone right now, would you be like, “Hi, I’m stellrrrrrrr?”

Since Sharon cannot answer we turn back to Paul, who is the only person in the office right now. Paul?

A: Seriously, who the hell is Sharon O?

Q: Thank you. Now, Sharon, you have survived nomination quite a number of times. Some people have suggested that it’s your strategy in the game. Whenever you are nominated, there is somebody who is more disagreeable to the viewers than you, and that is how you survive. Do you think it is this “low key” persona that is responsible for your success so far, and do you think this is a good lesson to give to the kids in Uganda? That boring people can help you succeed? Sharon, is this the message you want to send to the girl child?

A: I’ve googled Sharon O on my Ideos and I’ve come up with the following answers: Sharon O’Hara, Sharon O’Dowd, Sharon Osbourne… Which one is it?

Q: That was Paul. Thank you Paul, you can now go back to unplugging the toilets. The interview is over.

A: There were stubs from Somali marijuana cigarettes that were causing the blockage. You should not try to flush them down the toilet.

Q: YOU BASTARD! I do NOT hire a PLUMBER to tell me what and what not to do with my TOILET! I’m going to count to three. If you are still here when I open my eyes, then I swear whatever gods you worship have mercy on your head because my foot will move so fast…