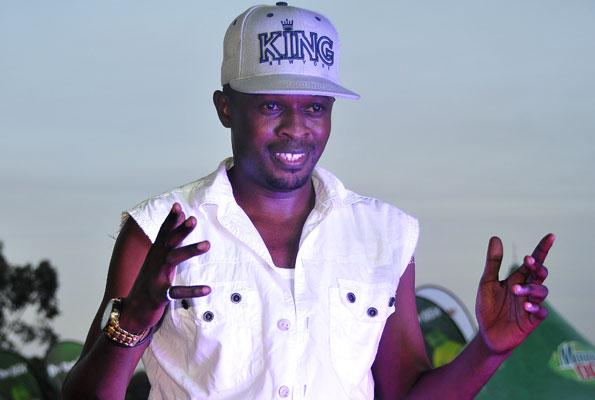 Having DJ Shiru Kiberu play at any event is always an absolute pleasure. He has unlimited energy behind the decks and his choice of music is always spot on. He never fails to rock the joint and his infectious personality carries over the decks into the crowd, which always makes for a jumping party. Popularly known as Shirumatic to his legion of fans across the country, Shiru is a very talented and determined DJ to his fans.

He may be small in size but he makes up for it in the fame he has garnered as the No. 1 spin master. Everyone has heard of DJ Shiru, but I’m sure when most of you meet him for the very first you can swear he is not the one. He has spinned the discs at the biggest shows staged on the land –being the in-house DJ for Silk Events’ organized shows! From Bennie man, to Shaggy, R. Kelly, name it. He is not so keen to talk about his education but he trained in Deejaaying at Rainbow Promotions –which was owned by his brother DJ Rota. He started small, escorting his brother at shows where he played and slowly he learnt to and started doing his thing. Today he is one of the most sought after Deejays. Exposed Magazine brings you Shiru in an exclusive interview!

EXPO: Who is DJ Shiru

SHI: I am a versatile DJ who plays all types of music. Am not like other DJS who specialise in a particular type of music. I am good at Lingala, Hip-Hop, R’n’B, Zouk, Old Skool, Dancehall, Techno, Bongoflava that’s why when I am at a function everyone is guaranteed to have a good time.

EXPO: Many people consider you the best house music DJ in the country today. How does that make you feel?

SHI: That’s a great achievement for me and it makes me feel proud of myself. It’s a fact because I have won awards in different categories and even the DJ competitions. It did not come on a silver plate but hard work, dedication and passion for deejaying have driven me to this level.

EXPO: How have you managed to keep ahead in such a competitive field?

SHI: A Combination of talent and creativity as well as continuous improvement throughout the years have paid dividends for my DJ career.

EXPO: What makes you unique and so special?

SHI: There a few things I have initiated in the music industry as far as deejaying is concerned. I introduced local music remixes that forced many musicians to start doing another version of their songs to give it taste. Sometimes, the original song might not be a hit but then a remix can. This can be seen with Kenzo’s stamina and Chameleone’s Vumilia. I introduced video mixes in clubs after my short stint in UK. I started live television Veejaying. I have done numerous non stops that are used by most amateur DJs in upcountry discotheques and several radio stations in the country.

EXPO: When and why did you choose to become a DJ?

SHI: I started deejaying in 2002. I decided to take on the deejaying career as Hobson’s choice after failing to get school fees to complete my HSC, where I was doing PCM. Having a brother in the field (DJ Rota), I felt I had an upper hand to guide me. I was groomed from his Rainbow Promotions till when he started taking me to different school trans-day discos, where I matured into a club DJ. It was really what we can term as low standard deejaying.

EXPO: What has been your most memorable gig so far?

SHI: I have played at so many big shows in the country ranging from PAM awards, to street Jams, shows graced by big international artiste like Shaggy, R.Kelly, Bennieman, Akon, Wyclef to mention but a few, But my memorable gigs are the, Chameleone tribute show to fallen promoter Rakeem Owori in Stratford Rex in London and the 2007 end of year Brick’n’Lace ‘love is wicked concert’ at Hotel Africana.

EXPO: What has been your most embarrassing moment while playing?

SHI: It was during some PAM Awards event when machines went off several times due to power failure, as a DJ, I felt bad throughout the event but the crowd could not realize what I was going through.

EXPO: What is the most difficult thing a DJ can experience, and through your experience what can one do to avoid such an instance getting worse?

SHI: Down-right hatred from different stakeholders such as musicians, fellow DJs and other old-guards. But ignoring them and concentrating on doing what I do best has been my option.

EXPO: Would you care to tell us what goes through your mind when you play to a packed crowd?

SHI: I feel happy when I see people enjoying and appreciating what I do. It is the best moment for any DJ.

EXPO: What is your greatest fear in your field of work (as a DJ)?

SHI: Hatred from the industry and maybe failing to get recognized for my talent

EXPO: Besides deejaying, what else do you do?

SHI: I have a radio and TV live link-up show at the vision owned Bukedde TV/radio on Saturdays. I have my offices at Zainab Azziz building where I do remixes and DVD mixes, from during week days.

EXPO: How long do you want to continue deejaying?

SHI: To me, deejaying is an art that comes with a great feeling, So, as long as the energy is there, I will still rock. At this point I can’t say or state the time when I will quit. But as you know no one can cheat age. The older one gets, the harder it becomes for one to continue deejaying.

EXPO: What place’s out of the country have you played in and how was the response?

SHI: I have been to different countries such as Dubai, UK, Nigeria, Zanzibar and South Africa. Like I said, I am a versatile DJ. Wherever you take me I can stir the crowd because of my knowledge of so many different music genres; that’s why I have never disappointed the promoters who take me.

EXPO: What is the state of Ugandan music productions as far as you are concerned and what would it take for it to be recognized internationally?

SHI: The industry has improved tremendously, That’s why these days some Ugandan music is played on MTV base. The Navios, Chameleone and Bebe Cool are soon getting to the next level in Africa. Basically in Africa it is already established and that’s why there are now collaborations between Ugandan musicians and the Zambian, Nigerians and South Africans. And, I think internationally, we are getting there soon because in Africa, Uganda is ranked 3rd after South Africa and Nigeria.

EXPO: In your opinion what is the state of clubbing today as opposed to say 10 years ago?

SHI: The number of club revelers has increased unlike years ago. Clubs appealed to ‘high school students,I am a campuser-I am still young working corporate’ crowd, but now even old people are there and city tycoons are socializing and networking.

EXPO: What would you like to see happen to the deejaying fraternity?

SHI: I would like too much support of local DJs by club owners and patrons. I am sick and tired of seeing big companies prefer to hire foreign DJs to play local events. We have seen many foreign DJs flown into the country. The likes of DJ Switch, Benny D and DJ Pinye, seriously for what?

EXPO: Are you dating someone at the moment and if so who is she?

SHI: No comment, all I can say is that I live with my girlfriend, who is the mother of my twins and we are happy together.

EXPO: What about the UK based Sheba who was to have introduced you to her family in oxford?

EXPO: Rumour has been going around that you have a ‘kraal’ of kids?
SHI: Of course that’s just a rumor but the fact is that I have only four kids.

EXPO: What is your advice for any one who wants to become a DJ?

SHI: Forget about sleep. Most of Deejaying gigs are at night, So, automatically sleep has to be sacrificed and like any other job it’s not a bed of roses.

EXPO: What’s next for you in terms of deejaying?

SHI: Only time will tell, but I’m trying to spread my wings further by grooming some talent through my Shirumatic academy. I have so far released two cadets from my academy .Yasin DJ and Lwasam of Dembe FM. There are individuals who passed through my hands like UK Volts DJ OJ and Peter of Platinum9.

5 Things that Prove that Uganda is the Pearl of Africa